We thank God for the dedicated people who built this church and struggled to maintain it. We give thanks for what this church means to the community and we look forward with faith and great expectation to the dawning of that which God has in store for us. 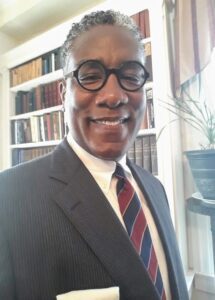 Rev. Tillard is a Baptist and Congregational minister, licensed and ordained at the historic Abyssinian Baptist Church of New York. He is affiliated with the National Baptist Convention USA, Inc., The American Baptist Churches USA. He has held dual standing with the Metropolitan Association of the United Church of Christ, New York Conference.

Rev. Tillard is always very active in his community, serving on boards and in organizations in the parishes that he has served. He frequently preaches in some of the leading church pulpits throughout the New York metropolitan area and the nation. He is also an Adjunct Professor at The City College of New York, in the Black Studies Department. He also hosts a radio program, Conversations with Conrad, on WHCR 90.3 FM in New York City. He is also completing his memoir, which chronicles his extraordinary journey to the Gospel ministry.

Selected in 2015 to receive the Humanitarian Community Leadership Award, The Culvert News Community Awards and in 2009 as "Pastor of the Year" in Brooklyn, New York, by Church Women United and in 2005 and 2006 by Beliefnet.com as one of "The Most Influential Spiritual Black Leaders," in the United States, the Reverend Conrad B. Tillard is an essential ecclesiastical voice growing in America. For thirty years, he has been a student activist, minister, and community activist.

Rev. Tillard has had an ecumenical and interfaith journey. He has also served a historic congregation in Harlem, where he resides, and he is the recipient of many awards and citations; he has explored the holy land. He is a jazz lover and a proud father Amir, a Los Angeles-based artist, Najmah, a Howard University Graduate, Conrad Jr, a Fisk University graduate. And Barack, his "assistant pastor," is a 5th grader.